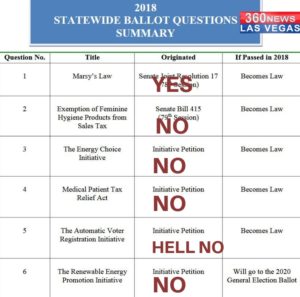 Tomorrow early voting starts and there has been very little information about the ballot questions except for a couple stand outs with big money pushing them. So I decided to read and review each one of the ballot measures and give voters some direction.

YES: Question 1 or better known as Marcy’s Law, would empower victims to be heard in court and be notified of all court proceedings, including the place and time of an offenders’ incarceration and release. After watching how the criminal justice system worked up close when a female friend was being stalked by a truly insane person and her total lack of power in the system and the total  lack of protection she received when he was convicted and release early without her being notified.

NO: Question 2 asks voters to exempt tampons from sales taxes which costs the average woman around $1 per month or $12 per year in sales taxes. The group backing the ballot initiative claims tampons are a medical device and deserve the same status by exempting them from sales taxes. They claim charging sales taxes for tampons hurts poor women. While I am generally in favor of cutting all taxes, we do need tax revenue from somewhere to fund police, roads and schools. Keep in mind, Nevada does not have an income tax so sales taxes and fees are the only way that State and local governments can procure revenue. Asking women to contribute a dollar per month to police, roads and schools seems reasonable and just. Men must pay for shaving cream, razor blades, soap and skin lotion. I NEED a cell phone in order to work. I NEED gas for my car. We all NEED many things to function in a modern world on a daily basis. Since Nevada does not have an income tax we must use sales tax revenue to pay for government. Our choice is clear. Either we pay sales taxes or we create a state income tax. I would rather Nevada keep it’s competitive edge and use sales taxes and fees to avoid the liberal income state trap that has sent so many businesses fleeing to Nevada. SO I’m voting NO on question 2.

NO: Question 3’s fatal flaw. The Energy Choice initiative is misleading and contains a fatal flaw in section 3 “The Legislature need not provide for the deregulation of transmission or distribution of electricity in order to establish a competitive market consistent with this Act.” I am generally in favor of more choices in the market place but Question 3 fails to deliver real choice when the bill itself blocks deregulating the transmission and distribution of electricity. In addition, the ballot measure fails to provide for protections against price gauging and surges that will hurt everyone. This ballot intuitive will only benefit large consumers like the Casinos who want to break away from NV Energy without paying the millions to leave the system. Vote NO on Question 3.

NO: Question 4 Medical Patient Tax Relief Act. I recommend a No vote on Question 4 for the same reasons I opposed Question 2 the feminine hygiene tax exception. By chipping away at the sales tax revenue we will be forced to create a State Income Tax at some point. In addition, the revenue generated by this sales tax goes to the general fund and helps pay for the very medical devices being used by the poor and needy. The sales tax is truly the one fair tax if it applies equally across the board to everyone in society. VOTE NO on Question 4.

“A YES vote on Question 4 helps sick, injured, and dying patients and their families. It stops the Department of Taxation from imposing unnecessary sales taxes on medical equipment
prescribed by physician s, such as wheelchairs, infant apnea monitors, and oxygen delivery devices”.
The NO Folks argue:
Question 4 seeks to exempt durable medical equipment from sales tax. On the surface, this exemption seems like a good thing, providing tax relief to those in need. However, this
exemption is really a wolf in sheep’s clothing:
1. It is vaguely worded without clear definitions of what specific devices will be exempt and who will benefit, leaving such determination to the Legislature;
2. It decreases an unknown amount of revenue from an already strained budget, creating the need for higher taxes in the future; and
3. It uses the law to provide special privileges to a special-interest group at the expense of everyday taxpayers. Tax exemptions have consequences for the taxpayer; the same consequences
as tax subsidies, tax breaks, tax abatement, and tax incentives. The Nevada Department of Taxation’s 2013-2014 Tax Expenditure Report states that Nevada has 243 such tax expenditures that cost taxpayers over $3.7 BILLION a biennium

HELL NO: Question 5 will automatically opt in everyone to register to vote who has a Nevada DMV issued driver’s license and or State ID card. The current DMV computer system does not distinguish drivers with green cards and felony records from those without. So Question 5 will register hundreds of thousands of people to vote who do not have the legal right to vote. In addition, as Governor Sandoval argued, over half of he people in Nevada choose not to be registered to vote. Question 5 will strip people of their right to choose and force them to register to vote. Those people would then be forced to go to the DMV and opt out. Question 5 would open the  door to wide spread voter fraud as well.

“Shall Article 4 of the Nevada Constitution be amended to require, beginning in calendar year 2022, that all providers of electric utility services who sell electricity to retail customers for consumption in Nevada generate or acquire incrementally larger percentages of electricity from renewable energy resources so that by calendar year 2030 not less than 50 percent of the total amount of electricity sold by each provider to its retail customers in Nevada comes from renewable energy resources”

Under President Trump’s leadership, the U.S. has just become the largest producer of oil and natural gas in the world. Natural gas is am extremely clean fuel, and very cheap compared to Solar. Solar only works with government subsidies. This ballot measure exposes the flaw in Solar energy. The backers of Solar need this law to force the us to use Solar because the market place prefers natural gas which has been historically cheaper and more reliable. Most of the Solar panels are now made in China, so we would be dependent on China for our energy. The U.S. has an estimated 500 years of natural gas.  And last but not least, this is a subsidy for Solar power. Question 6 would force you to pay to power your neighbor’s home with solar panels.

The Complete Guide to the Ballot Measures –>  2018StatewideBallotQuestio