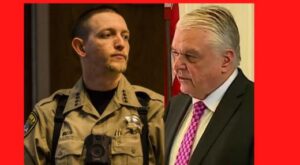 Last year we saw every Sheriff in the State of Nevada sign a pledge not to enforce the unconstitutional Gun Red Flag laws passed by Sisolak in 2019, a trend that spread across the country. Now as we see Dem Governors overreaching the limits of common sense and the rule of law, like Gov. Newsom imposing a Martial Law type curfew of 10pm and Sisolak trying to limit Thanksgiving and threatening more shut downs. Sheriffs are starting to push back.

“Remember.. moments aren’t guaranteed. Cherish all of them.
Don’t cancel your plans because the government tells you to…. remember.. WE THE PEOPLE tell the government what to do… not the other way around!” 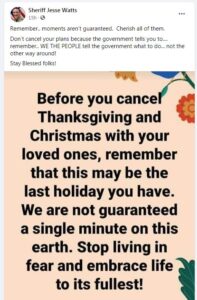