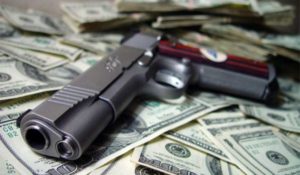 The best gun salesman ever was, by far, President Obama. His calls to restrict gun rights drove the sale of guns through the roof. The AR-15 rifle hit an all time high of over $2,000 after President Obama was reelected in 2012 and following his calls for mass gun control after the shooting at Sandy Hook. But after Donald Trump was elected President and with a Republican controlled Congress set to expand guns right including a possible national conceal carry law, the AR-15 can be purchased for around $500.

Over the weekend I went to the Las Vegas Gun Show and found many of the vendors suffering through a major slowdown in sales. That same show was on fire in 2013. “We are all breathing easier that Hillary lost” said one gun show vendor. Hillary would have driven gun sales through the roof had she won the election according to many vendors and shoppers alike at the show. So the irony of Republican dominance in government isn’t massive guns sales, its actually a major slow down. The lesson may be for Democrats and those interested in reducing guns is, elect more Republicans.