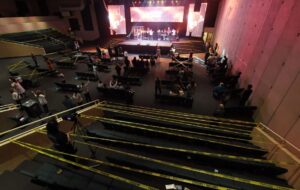 Sisolak targeted churches and other religious institution limiting them to 50 people no matter how large their building fire code allowed. But Sisolak allowed Casinos to have up to 25% occupancy. Calvary Chapel Lone Mountain Church asked the court to treat their 700 person capacity the same as they do Casinos and other businesses in Nevada.

The case was originally filed by Joey Gilbert and Sigal Chattah in the lower Federal District Court which sided with Gov. Sisolak. But after Roman Catholic Diocese of Brooklyn v. Cuomo, last month voided the limits, the 9th Circuit ruled in favor of Calvary Chapel Lone Mountain Church. The 9th Circuit issued a preliminary Injunction against the state of Nevada enjoining them from limiting capacity to 50 people. They must treat all religious buildings the same as other businesses.

Prior, Calvary Church Danton Valley in Northern Nevada, filed a lawsuit. But The Supreme Court of the United States denied an emergency application by the Calvary Chapel Danton Valley to hold religious services. But after Amy Barrett was appointed the Supreme Court by President Trump, they ruled in favor of Roman Catholic Diocese of Brooklyn v. Cuomo, clearing the path for Calvary Chapel Lone Mountain Church’s victory today. But the case is still pending in District Court and may still go to trial in the next 2 years.

Calvary Chapel Lone Mountain Church was the only Church or house of worship in Clark County To Challenge Governor Sisolak’s CV19 in court.

“Calvary Chapel has demonstrated a likelihood of success on the merits of its Free Exercise claim. It has also established that the occupancy limitations contained in the Directive—if enforced—will cause irreparable harm, and that the issuance of an injunction is in the public interest.”

The Court’s ruling applies to every house of worship in Nevada.