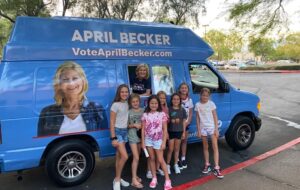 150,000 Nevadans just had their votes for Commission C tossed in Clark County, without any court review, after an admission of widespread vote fraud, including double voting. But Gloria is refusing to certify a new election for Republican Candidate April Becker’s district, which falls within District C.

April Becker is running against Dem State Senator Nicole Cannizzaro, the majority leader who passed the mail-in-ballot scheme, literally in the middle of the night, just a few months ago.

Out of some 67,000 votes cast in District 6, Cannizzaro received about 600 more votes, most of which came in after the election on Thursday and Friday. Cannizzaro barely campaigned in the district, unlike April who actually purchased an ice cream truck and drove it throughout the district for months, meeting thousands of voters day and night.

April Becker filed a lawsuit this week seeking a new election in a Writ of Mandamus scheduled to be heard Nov.24, 2020.

April’s Writ outlines extensive corruption by Joe Gloria and the Democrats in the county elections department, including;

#1. Violating federal election laws when they failed to remove thousands of ballots listed as undelivered in the June primary,

#3. Mailed every active and inactive voter a ballot.

#4. Gloria’s egregious and illegal use of the Agillis mail ballot processing system in direct violation of Nevada Revised Statute 293B.063.

April actually canvassed her district finding 57 votes cast by folks who moved away from the homes where the mail in ballots were sent. But the current residents claimed in sworn statements they never received the mail in ballots for the prior residents. So how did those ballots get counted?

April is seeking a new election just like Ross Miller and Staveros Anthony are getting. April’s District falls within the County Commission District and is entitled to the same relief as the County race. But this would be the second race in Clark County not certified for fraud and that would help President Trump, so expect a huge fight. That raises an obvious question most folks have. How can Gloria throw out the just the 150k votes for Commission C but not 150k votes for President on the same ballots?