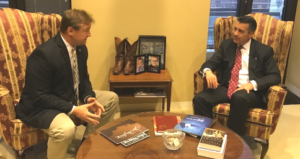 Last month U.S. Senator Dean Heller and Gov. Sandoval stood side by side in opposition to the House healthcare bill to replace Obamacare. Ever since the general election, Heller has been a target of the left here in Nevada with protesters stalking him everywhere he goes trying to lobby him to oppose any changes to Obamacare. Heller announced in January he will be running for reelection in the U.S. Senate in 2018.

So like usual, Heller sided with the Democrats and closet Democrats like Sandoval, and openly opposed any real changes to Obamacare without a plan of his own. Heller was in the House when Obamacare passed and yes he voted against it. He ran against Obamacare in his successful Senate bid four years ago. Now he is in a position to kill Obamacare and pass a new law but Heller after 8 years in Washington D.C. has no plan.

Heller was a loud Never Trumper in Nevada, even after Trump won the nomination. But after the election he pledged to work with President Trump. Repealing and replacing Obamacare was the first real test for Heller and he failed. So now Heller and the Democrats own Obamacare.

Heller is feeling the big squeeze from all directions. With his conservative base out for blood and the liberal Democrats targeting his Senate seat, Heller has retreated to the RINO’s for safety. But Gov. Sandoval blew all his political capital two years ago when he screwed over Republicans in Nevada with the largest tax increase in our history. So Heller won’t be able to count of Gov. Sandoval to help him win reelection. If anything Sandoval will be a drag on him if he faces a real challenger in the Republican primary. Heller has run out of friends in Nevada and is the target of Republicans looking to replace him with a pro Trump Republican.

Heller and the RINO’s opposed any real changes to Obamacare and they got what they wanted. Kind of like the dog chasing a car down the street and he finally catches it and doesn’t know what to do with it.