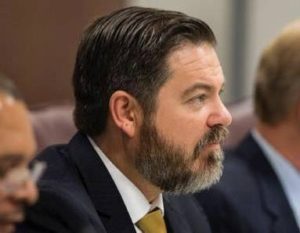 “Prevent Sanctuary Cities” was formed last week be State Sen. Michael Roberson to draft and advocate for a 2018 ballot initiative to outlaw sanctuary cities in Nevada.

“I am proud to lead the effort to pass a ballot question to prevent sanctuary cities in Nevada,” Roberson said. “We look forward to unveiling an aggressive signature-gathering strategy and spreading our message to every corner of Nevada.

As reported in the news, “The successful passage of this ballot question will help to keep our communities safe by ensuring that local jurisdictions do not willfully ignore federal law and operate as sanctuary cities,” he said. “This will allow local law enforcement to cooperate with our federal immigration officials once they have detained dangerous criminal aliens who have committed crimes in our state and who should be removed from our country.”

Michael Roberson lost his bid for Congressional District 3 last year in a heated Republican primary to Danny Tarkanian after Roberson supported the largest tax increase in the state’s history deeply dividing the Republican party. Roberson is now the Minority Leader of the Nevada State Senate and has moved sharply to the right. But recent conservative bills he drafted in the Senate like the one to ban sanctuary cities were knowingly dead on arrive, so what should the Republican base believe? That Roberson has seen the light and the errors of his ways. Is Roberson a born again conservative or just playing political games again like the last time he ran for reelection? At the end of the day, all a politician has is his word and credibility, both of which Roberson lacks in the eyes of Republican base voters today.

Fool me once, shame on you.

Fool me twice, shame on me.