In local news, Democratic Assembly Candidate Owen Carver, who’s challenging Republican Speaker John Hambrick in District 2, is hitting a brick wall from his own party. According to inside sources, Assembly Democrat leadership appears to have struck a deal with Republican John Hambrick, not to support his Democratic rival Owen Carver. Even tho Assembly District 2 appears to be in play this election due to the significant increase in Democratic registration efforts and turn out during a Presidential Election, Assembly Democrats prefer Speaker John Hambrick over the young and dynamic new candidate Owen Carver.

Carver responded to the article by saying: SEE VIDEO

Owen won a three way race in the primary. Owen Carver is a young  business owner of an internet company and gives to educational causes. Carver, a former Zappos customer service and corporate cultural trainer, is advocating using technology to reduce administrative costs in the School District rather than increasing taxes. This could be a race to watch this year.

IN other news, Attorney General Adam Laxalt’s Office of Military Legal Assistance and Nevada Legal Services will be hosting a free Wills and Powers of Attorney workshops for Nevada Veterans at the American Legion Post located at 733 Veterans Memorial Drive, Las Vegas, Nevada. Attorneys will be available to assist veterans from 10am to 2pm.

Attorneys from the Office of the Nevada Attorney General will be available to draft wills and powers of attorney. Representatives from Nevada Legal Services will be available to discuss legal issues relative to family law, bankruptcy, consumer issues, landlord/tenant and access/denial to public benefits. Nevada Department of Veterans Services Officers will also be present to answer and address benefit needs.

Workshops will take place at least once per month throughout the State of Nevada. The workshops are free and open to all Nevada veterans. For more information on upcoming workshops please visit our new Community Calendar. 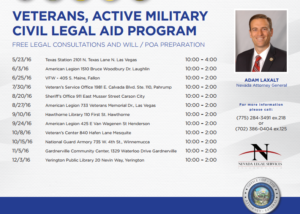