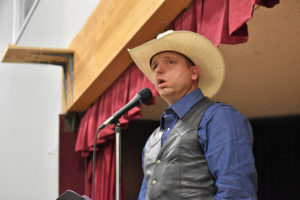 To understand recent statements made by the Bundy clan about open borders, one must understand the Bundy Family’s view of the world.  The Bundy’s are deeply religious Mormons whose heritage in Nevada goes back some 140 plus years. They do not accept the concept of a United States sovereign Federal government which reins over 50 inferior states.

During Ryan Bundy’s campaign for Governor of Nevada he told a group of prospective supporters when asked about his views on states’ rights Ryan Bundy answered “I am not a citizen of the United States. I am a citizen of Nevada.” Bundy went on to describe his views while gripping the Constitution like the bible and ignoring 240 years of U.S. history and the “American” civil war.

The civil war was about whether a state could leave the United States of America and that question was answered with the blood of 750,000 American lives. Lincoln’s premise was that the citizens in the States that tried to leave the Union were still U.S. citizens and entitled to the protection of the Federal government including the slaves. So when Lincoln freed the slaves he codified that view and that view won the “American” civil war. The American civil war changed the relationship between the states and the federal government and now we are all citizens of the United States not just citizens of the states we live in. Yes it is true that some 13 independent states in 1776 came together, fought the British and won their independence. But they tried to govern themselves for several years and it was a failure. So the 13 states formed the federal government to raise an army, protect and defend our national borders, create one currency and one national trade policy with other nations. It was a fact that until the civil war, the U.S. Bill of rights in the Constitution was not thought to apply to the states and their authority over their citizens. So for example, the State of New York could pass gun laws that violated the 2nd amendment of the U.S. Constitution.

Now it’s not surprising that the Bundy clan has negative feelings towards the Federal government after spending some 2 years in jail without having been convicted of any crimes. I get it. But in the end, their efforts to stand up to the U.S. government at Bunkerville and at the Oregon Nature Preserve over land issues and states’ rights has ended right back with the Bundy’s suing in U.S. Federal courts to enforce their U.S. Constitutional rights, not in Nevada State court. Meaning even they now must accept the authority of the National government and their courts. In fact Ryan Bundy is suing in Federal Court seeking finical damages from the prosecutors for abusing their powers and violating Bundy’s U.S. Constitutional rights. I assume if the U.S. Federal Court awards him millions of dollars in damages he will accept the power of the Federal government’s authority and seek to use it to enforce the judgment in his case??

So logic and consistency maybe lacking between their public political statements and their legal actions but their faith and passion for their view of the world drives them forward today. For example, even though Ryan Bundy states he is a citizen of Nevada and not of the United States of America he picks and chooses the Nevada state laws he follows. Ryan Bundy refuses to get a Nevada issued driver’s license even though the duly elected state officials require Nevada citizens to obtain such a permit. And recently Ryan Bundy and his family have spoken out about the Border issue declaring they want open borders in the wake of the migrants challenging the Trump administration’s immigration policies.

Ammon Bundy in a recently pod cast about the migrants trying to come the U.S said “As a Christian Nation we should help our neighbors who are in need.” The Bundy’s Mormon faith guides them and they are good people with compassion for those in need. Ammon said “We need more of those kind of people” referring to migrant workers he met through his life who worked on local farms in Nevada. He went on to say he believed that the immigrants should go through the legal process in order to enter the U.S. but then said illegal aliens who do come in, don’t get welfare, work hard, pay taxes and become good independent people and “literally becomes a better citizen”. Ammon ignored the anchor baby issue, where illegal aliens can give birth to a child in the U.S. and now get welfare for the child, get free healthcare, get free education ect. Ammon defends the legal rights of the migrants to seek asylum claiming the U.S. caused their problems by giving money to their country of origin. Ammon went on to claim President Trump’s efforts to stop their entry is violates their rights under the law. Specifically, Ammon stated that every person has the right to apply for asylum in the U.S., every.

The problem is that 7 Billion people in the world want to come to the U.S. and could claim some sort of asylum based on poverty and or oppression. The great majority of the people on Earth live in poverty under oppressive governments. We cannot open our doors to every poor soul on the planet. That is why we instead are hugely generous in providing aid to foreign countries in an effort to help people around the world who are in need.

The Bundys are inconsistent in their views on the Constitution and states’ rights and border issues no more than the rest of us. Most of us pick and choose which issues we want government to use its power to enforce and whine about the government uses force when we don’t agree. I do not mean to pick on them but they are front and center in the news making comments that do shape the public’s perception of the world so it’s only fair to fully examine the full scope of their views and actions in an effort to put them in context.