On Thursday August 17, 2016, at the Gov. Pence Presidential rally in Henderson, 4 time failed talk show host Jon Ralston tweeted extremely offensive comments about a local veteran who simply was asking a question. The Veteran, Steve Sanson, asked the Govenor what he would do with the 145,000 veterans locked up in prison who are there because of PTSD. Pence responded by asking all the veterans in the room to stand up so they could be honored. Gov. Pence then went on to answer the question.

For some odd reason, this pleasant exchange caused Jon Ralston to tweet “Pence asked people to stand and applaud Sanson, who is known joke in Nevada political circles and who has been exposed by many journos.”

Steve Sanson, is the President of Veterans in politics and lead the effort in creating the Veterans’ Specialty Courts which deal with high risk veterans. Steve’s efforts brought justice to the wife of a slain veteran and the end to a Metro Police Sheriff’s career for trying to cover it up. Yes Steve is loud, boisterous and opinionated, but what Marine isn’t? Steve Sanson is a disabled Desert Storm who served with honor. 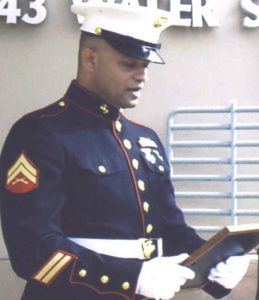 Steve came into our studio to respond to Ralston’s attack:

“I don’t understand why Mr. Ralston would single me out at the rally for just asking Gov. Pence how he would help the 145,000 veterans suffering with PTSD currently in prison. I have made serving the Veterans’ community my life’s work. Perhaps if Mr. Ralston had worn the uniform and fought in a war for his country like I did he would show a little more respect for my efforts on behalf of veterans.”

We will see if Sanson’s demands that KTNV Channel 13 fire Ralston or face a boycott by Veterans groups across the valley, and veterans account for more the 300,000 resident here in nevada, will make Jon Ralston a 5 time failed talk show host.