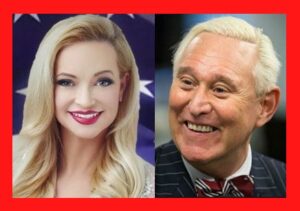 Veteran Republican strategist, friend of Trump, Roger Stone, endorsed local Social Media Firebrand Mindy Robinson for Nevada’s 3rd Congressional District. Stone worked on the campaigns of Republican politicians Richard Nixon, Ronald Reagan, Jack Kemp, Bob Dole, and Donald Trump was at the center of a fire storm of his own facing prison in a case that many Republicans feel he was railroaded by Deep State DOJ insiders. Trump has threatened to pardon Stone if the Judge doesn’t treat Stone more fairly. Stone was accused of lying to Congress.

Stone is still restricted by the Federal Judge in his case from any interviews or any media comments at this time.

Robinson responded to Stone’s endorsement “Roger Stone is a political legend and I’m honored to have his guidance during this unprecedentedly important time for Republican campaigns in this country. The extremely biased and tainted jury he received during that sham trial the Left threw at him should be reason enough for Trump to pardon this true American patriot.”