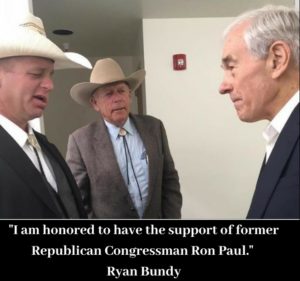 Dr. Paul said in his endorsement:

“Ryan Bundy knows first-hand how the federal government feels about our civil liberties. He was imprisoned for two years waiting for his trial on charges related to the Bundy Ranch standoff with federal authorities. The government side was found to have withheld evidence that could have been used in his defense, thankfully leading to a mistrial. Ryan Bundy is running for governor of Nevada because he is tired of government abuse, and I hope Nevadans will consider giving him their vote.”

Ron Paul’s endorsement is a huge step for Bundy in building momentum just as the election season kicks off with Labor Day approaching. Dr. Paul has a significant amount of support across Nevada which will play well in the rurals and help lend national credibility to Bundy’s campaign.

Bundy also recently was endorsed by Sheriff Mack and Donna Cox. Bundy is running as an independent candidate against Adam Laxalt and Steve Sisolak. 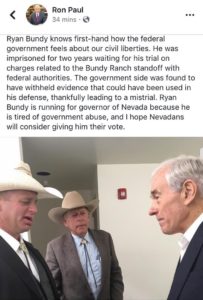