IS ROBERT E. LEE’S HOUSE AT ARLINGTON NEXT? WAS LEE A TRAITOR OR HERO?

IS ROBERT E. LEE’S HOUSE AT ARLINGTON NEXT? WAS LEE A TRAITOR OR HERO? 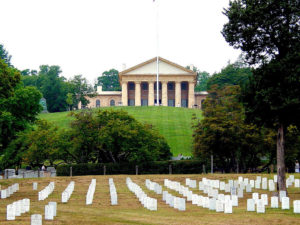 After watching liberal mayors across the south tear down monuments of Robert E. Lee one must ask where should this stop?

Lee was no hero. Lee married the granddaughter of President George Washington and as such betrayed the oath he took to his family heritage and to the U.S. Army when he joined the Confederate Army. He was a traitor and should have been hung, not honored. His actions led to the deaths of some 700,000 Americans in the Civil War. Nothing to be honored there. But he did try and heal the nation after the Civil War.

Lee believed slavery was ordered by God and only God would stop it. He opposed giving blacks the right to vote even after the war. He also thought blacks were better off as slaves than free in Africa.

So let’s stop trying to glorify Lee’s legacy. But he was a historical figure just the same. He played a massive role in American History and as such should be remembered. Most people are not all good or all evil. They are a little of both just trying to make their way through life driven by fear, love, greed, and pain.

But Robert E. Lee’s home, now Arlington National Cemetery, is part of our nation’s darkest time and part of our most glorious history and needs to be protected.

On May 24, 1861, just a few hours after the Commonwealth of Virginia ratified an ordinance of secession, thus joining the Confederate States of America, over 3,500 U.S. Army soldiers, commanded by Brig. Gen. Irvin McDowell, streamed across the Potomac River into northern Virginia and captured Arlington estate. Although many believed the occupation of the estate was an intentional insult towards the Lee family, in reality the confiscation of the property was a military necessity. Arlington House, located on Arlington Heights, the high ground overlooking Washington, D.C., posed a tempting target for Confederate forces. Mid-19th-century artillery, situated on this elevated terrain, could easily range every federal building in the city, including the White House and Capitol. Throughout the war, federal troops used the land as a camp and headquarters with forts constructed and incorporated into the defenses of Washington, DC, including Fort Whipple (now Fort Myer) and Fort McPherson (now Section 11).

“It is better to make up our minds to a general loss. They cannot take away the remembrance of the spot, and the memories of those that to us rendered it sacred. That will remain to us as long as life will last, and that we can preserve.”

The federal government confiscated the property when Mrs. Lee failed to pay, in person, taxes levied against Arlington estate. Offered for public sale on January 11, 1864, a tax commissioner purchased the property for “government use, for war, military, charitable and educational purposes.” It was not until 1864, when the increasing number of battle fatalities was outpacing the burial capacity of Washington, D.C., cemeteries that 200 acres of Arlington plantation were set aside as a cemetery. Upon the authority of Secretary of War Edwin Stanton, Brig. Gen. Montgomery C. Meigs, Quartermaster General of the U.S. Army, appropriated the grounds June 15, 1864, for use as a military cemetery. His intention was to render the house uninhabitable should the Lee family ever attempt to return. A stone and masonry burial vault in the rose garden, 20 feet wide and 10 feet deep, and containing the remains of 2,111 war casualties, was among the monuments to Union dead erected under Meigs’ orders. Meigs himself was later buried within 100 yards of Arlington House with his wife, father and son – the final statement to his original order.

Throughout the war, Arlington estate also provided assistance to the thousands of African-Americans fleeing enslavement in the South. On December 4, 1863, the federal government dedicated a planned community for freed slaves on the southern portion of the property, which was named Freedman’s Village. The federal government granted land to more than 1,100 freed slaves, where they farmed and lived until the turn of the 20th century.

Neither Robert E. Lee, nor his wife, as title holder, ever attempted to publicly recover control of Arlington House. The couple never returned to the home George Washington Parke Custis built and treasured. After Lee’s death in 1870, his son, George Washington Custis Lee, brought an action for ejectment in the Circuit Court of Alexandria (today Arlington) County, Va. Custis Lee, as eldest son of the Lees, claimed the land was illegally confiscated and that, according to his grandfather’s will, he was the legal owner. In December 1882, the U.S. Supreme Court, in a 5-4 decision, returned the property to Custis Lee, stating that confiscation of the property lacked due process. On March 3, 1883, Congress purchased the property from Lee for $150,000. Arlington National Cemetery continued its mission as a military reservation and burial ground for United States service members and family.

Arlington House (Custis-Lee Mansion) and its grounds are administered by the National Park Service.