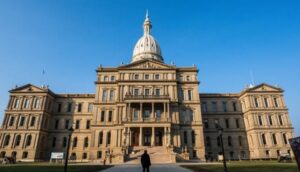 The Constitution has two provisions that dictate the selection of presidential electors.

1. The Constitution gives each state’s legislature has the authority to determine that manner of choosing its electors.

2. The Constitution gives Congress the power to decide when the electors are chosen, which Congress did under federal law. The Tuesday after the first Monday in November is Election Day.

But Federal law prescribes an exception.

Whenever any State has held an election for the purpose of choosing electors, and has failed to make a choice on the day prescribed by law, the electors may be appointed on a subsequent day in such a manner as the legislature of such State may direct.

(June 25, 1948, ch. 644, 62 Stat. 672.)
The Election system tabulating software in Antrim County, Michigan, shifted “6,000 votes to Biden and Democrats that were meant for Trump and Republicans.” Antrim County Officials rectified the issue after ballots were recounted by hand. According to the company’s website, the software is being used in every major swing state election.
In light if this, The Michigan’s Republican controlled Legislature is convening a special session to investigate the election failure and fraud. Citing the fraud and computers glitches that have resulted in a failure to select presidential electors and under federal law, they can chose the electors which may then support Pres. Trump.
.
Wisconsin, North Carolina, Georgia and Pennsylvania all have Republican controlled legislatures. In addition to those Republican legislatures conducting their own investigations, if President Trump’s legal team and rulings from the Supreme Court create enough doubt in the election process and dig up fraud and incompetence, those Republican controlled legislatures can then move to vote for Trump Delegates flipping the entire map for Trump.
In other words, this election is far from over.