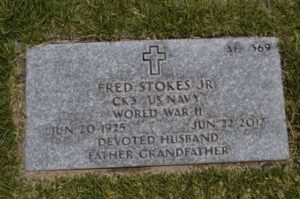 This week, 360 News received a list of allegedly dead voters in Nevada. After careful review and research it appears one Dead Dem voter indeed is haunting Clark County Elections Department. Political Consultant Rory McShane confirmed that Fred Stokes Jr. who died on June 22, 2017 did indeed cast his vote, which was officially received on Halloween 2020.

As reported by The Federalist Writer Tristan  Justice

On Oct. 9 this year, Fred Stokes Jr. was mailed a ballot in Clark County, Nevada, for the upcoming presidential election just less than 30 days away. Three weeks later, the county confirmed the ballot’s receipt on Halloween and marked it off as “completed.” There remained only one problem with Stokes’ absentee ballot counted on the fall holiday: Fred Stokes Jr. had been dead for three years.

According to the gravestone shown below, Stokes died at the age of 92 in June 2017.

Public records from the Clark County Registrar, however, show Stokes Jr. appeared to rise from the grave to vote in the November contest.

The Nevada Republican Party dispatched a staffer to the address shown on Stokes Jr.’s registration. At the address was a person who was told to be “a female resident” but who refused to share her name. She said Stokes Jr. had indeed lived at the residence but had passed away in 2017. She noted, however, that a man named Fred Stokes III was still alive and voted at the same address.

The revelation comes on the heels of a Nevada lawsuit filed by the Trump campaign Thursday alleging that upwards of 10,000 people voted who either live out of state or are deceased.

“We’re asking the judges to go through all the irregularities to stop the counting” of disputed ballots, said former Nevada Attorney General Adam Laxalt announcing the lawsuit. Former Vice President Joe Biden holds a narrow lead in Nevada of about 20,000 votes with 92 precincts reporting as of this writing. The Trump campaign has also launched lawsuits in Pennsylvania, Michigan, and Georgia, where Biden remains slightly ahead by razor-thin margins.

Clark County Registrar Joe Gloria, however, pushed back on Republican claims, telling reporters he was unaware of any improper ballots being counted.

The county registrar’s office did not immediately respond to The Federalist’s request for comment.

The Nevada Republican Party told The Federalist Friday it was still investigating hundreds of other cases in Clark County of deceased people voting.