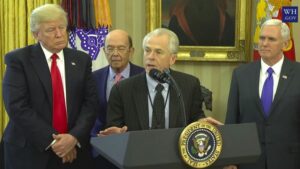 It was reported on Fox News this morning, that a U.S. Administration’s China Trade Representative / Trump’s Director of the Office of Trade and Manufacturing Policy, Peter Navarro is accusing the Chinese Communist Party of hoarding PPE gear while concealing the Corona Virus from the World Health Organization.

According to Navarro, in December 2019, the virus first mutated and began transmission human to human. This triggered a secret hoarding of PPE gear from around the world by the Chinese Government. At the same time, China continued to allow it’s infected citizens from Wuhan to travel to the U.S. and around the world spreading the disease.

Since the worldwide outbreak, China has become the number 1 supplier of PPE gear to the world.

According to the latest economic numbers, the U.S. economy, which was expected to grow by 3% in the 2nd quarter, is looking at a 30% loss now.

Lawsuits have already been filed against the Chinese Government by U.S. companies led by Robert Eglet, seeking trillions in damages in class action suits.