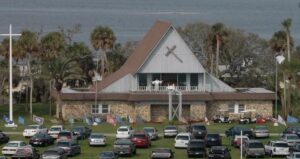 Nevada Gov. Sisolak issued the same exact rule earlier this week banning Drive Up Easter Services throughout Nevada. Now a Federal Judge has ruled in an exact case on point in Kentucky.

As reporter in the Legal Insurrection:

The Mayor of Louisville, Kentucky, has threatened to fine anyone who attends a drive-in Easter Sunday church service, even though attendees would remain in their cars in the parking lot.

The On Fire Christian Center sought an emergency Temporary Restraining Order (TRO)(pdf.) which was granted today by federal Judge Justin Walker in the Western District of Kentucky. Walker, a former clerk for Supreme Court Justice Brett Kavanaugh and protege of Mitch McConnell, recently was nominated to the Court of Appeals for the District of Columbia Circuit, and his nomination is expected to incide a scorched-earth opposition.

Judge Justin Walker, who has been nominated by Donald Trump to the D.C. Circuit and is close to Supreme Court Justice Brett Kavanaugh and Senate Majority Leader Mitch McConnell, found that the city unconstutionally prohibited drive-in religious services while not imposing such restrictions on parking at restaurants and liquor stores.

The TRO, granted ex parte without giving the City of Louisville a chance to be heard, provides in part:

The opinion does not question the governments ability to impose restrictions on the public to fight a pandemic. The central reasoning of the opinion is that because Louisville does not impose similar restrictions on parking at drive-through restaurants or liquor stores, singling out a religious establishment for more harsh treatment is unconstitutional.