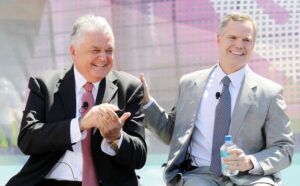 When Gov. Sisolak signed several State of Emergency Declarations this month ordering businesses to close due to the threat of a pandemic from COVID19, the rights of business owners were certainly suspended. Just ask those the Police visited recently and issued citations to. Henderson police are threatening to arrest business owners who violate Sisolak’s orders.

Even though the criminal courts are open and hearing limited issues like bail, the civil courts are essentially closed highly limiting legal challenges right now.

“A state of emergency can be declared when a mayor, governor or the President of the United States determines a disaster, natural or man-made is severe enough to warrant additional aid and response beyond what is normally available in order to forestall additional damage or loss of life.” During an officially Declared State of Emergency people can be held without charges. Article One, Section 9, clause 2, which demands that “The privilege of the writ of habeas corpus shall not be suspended, unless when in cases of rebellion or invasion the public safety may require it.” but do we have suspend Habeas Corpus rights today in Nevada?

As Nevada watches Gov. Sisolak make one politicized decision after another many are starting to question his priorities. Sisolak is being accused of allowing industries that support him to stay open, picking super donor, Partisan Jim Murren to lead the Nevada Corona Virus Response Tack Force. Murren has zero medical training. Liquor stores are ordered closed but convenience stores and dispensaries are allowed to stay open. In fact, dispensaries were issued special privileges to deliver pot. Gun stores have been shut down, declare non-essential and CCW’s are not being issued while the government dumps criminals onto our streets. So your right to obtain a firearms is cut off as of now in Nevada. Your right to assemble has been suspended. Your right to certain medications has been suspended. Your right to work has been suspended. Your right to travel is extremely limited. Make no mistake, Gov. Sisolak has implemented Martial Law. Neither, the courts nor legislature has any say in what he is doing right now. NONE. Sisolak’s decisions have been arbitrary and capricious to say the least.

Here’s the question; does the “possibility” of thousands of people dying in the future from an unknown disease give the Governor unlimited, uncheck powers over the life and death of 3 million Nevadans without any oversite from the courts or legislature? Sounds ripe for abuse by corrupt politicians.

Don’t miss-understand me, I believe the government needs the powers to take emergency actions under extreme situations but if the a small group of elected leaders have to sign off then this provides a small measure of protection against the politicization and abuse of the process.

In today’s high tech world there’s certainly time to work with other branches of the government as well. Many in Nevada are calling for reforms, including requiring a Governor to obtain a sign off from the Chief Justice of the State Supreme Court and the Leaders of the Legislature in order to Issue any Emergency Declaration that limits any Constitutional rights.