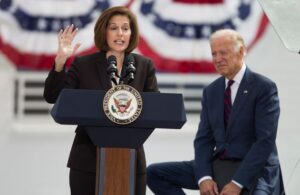 According to sources, Harry Reid has been lobbying Biden personally to consider Nevada U.S. Sen. Catherine Cortez Masto for the VP position on the ballot. She’s Latina and a woman and that combo is desperately needed to shore up Hispanic support for the ticket.

Masto was the Attorney General of Nevada prior to being elected to the U.S. Senate in 2017. Biden has pledged to pick a woman as his VP.