ROB CALLS BULL-CRAP ON Rep. AMODEI’S “Let’s put it through the process & see what happens”

ROB CALLS BULLSHIT ON REP. AMODEI’S “Let’s put it through the process & see what happens” 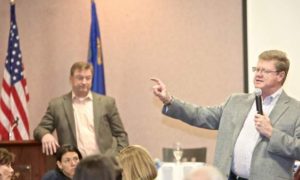 After the only Republican Congressman in Nevada came out as the first Republican in the Country in support of the Democrat’s fake impeachment hearings of President Trump yesterday on the record, Mark Amodei has been desperately trying to walk it back. But he was perfectly clear when he said he stands shoulder to shoulder with Dem Senator Cortez Masto in calling for the house to hold formal impeachment hearings to investigate President Trump.

1. What the f#ck is there to investigate? President Trump has every right under U.S. and international law to seek assistance from another foreign leader to investigate corruption.

President Trump is succeeding at turning the federal courts to the right, winning on the economy and he clearly has the MO to win re-election. The Dems are desperate to stop Trump. This is nothing more than the Dems politically assassinating President Trump through a Fake impeachment process; and Amodei is guy with the sniper rifle on the grass nole.

Amodei supports open borders, driver’s licenses for illegal aliens, open trade with China, He even refused to attend President Trump’s inauguration back in 2016. His consultant is Mike Slanker, The same guy who brought us Heller and Sandoval.