This week, Florida Governor Ron DeSantis was in the news for flying illegal aliens to Obama’s summer home in Martha’s Vineyard, humiliating Democrat elites who sent in the National Guard and removed the brown people within 24 hours. DeSantis has been humiliating and challenging the political elites since the beginning of the CV lock-downs. As he begins his reelection campaign, he released a television ad celebrating freedom in Florida as a result of those policies.

The TV AD reminds us how awful Sisolak real has been.

Just a reminder of what I wrote about Florida back in 2021: 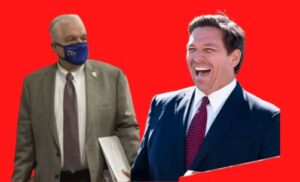 According to Worldometer, Nevada currently has 1,720 deaths per million while Florida has 1,574 deaths per million. Even Texas is doing better than Nevada with 1,691 deaths per million. While Nevada Governor Sisolak has kept Nevada locked down and just recently began slowing opening businesses, Florida has been wide open since September, including their schools. Clark County schools are just starting to allow some students to return slowly to classroom teaching this week.

Serious people are questioning whether lockdowns have worked at slowing the spread, or whether they caused the CV19 infection rate to be worse or did nothing to stop the spread.

The facts, 1 year in show that there is zero difference between states with lock downs and those without. California, with 1,516 deaths per million, where they are still locked down, has the same numbers as wide open Florida.

One year later, the science now shows lock downs did nothing to slow the spread of CV19 and failed to save any lives. Lockdowns just steal people’s freedom and ability to earn a living.