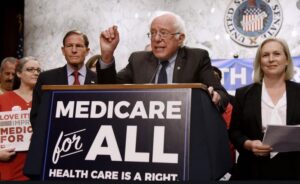 The government failed to stockpile sufficient corona virus testing kits and has no vaccine ready to stop the spread of the disease. So when we hear that some 2,000 Americans have the corona virus that’s a completely false number because only about 13,000 folks have been tested so far. Italy with its socialist healthcare system went from 2 Chinese tourists infected to 27,000 cases within 2 weeks resulting in about 2,100 deaths reported. The entire country of Italy has been on lock-down for over a week now. Italy’s healthcare system is so overwhelmed, there are now government officials talking about withholding care from seniors.

Governments across the world only answer so far has been to lock down their populations on house arrest.

The CDC’s annual budget is around $11 Billion, yet they are completely unprepared for this breakout. The government is now turning to “Big Pharma” to save our collective ass. Someone is going to need to research, test and manufacture test kits, and a vaccine for some 310 million Americans in short order. Imagine the capital investment to quickly build a factory to produce millions of test kits in short order? No company is going to do that without a profit motive. Its not possible to do that without the private sector.

Of course Bernie Sanders’ solution is FREE Test kits and Vaccines for everyone. But there is no free lunch, someone pays. If American Tax payers pick up the bill, that’s not free Bernie. Healthcare in the U.S. costs so much because of government involvement. Government regulations on Pharma, on medical devices, on hospital billing, on insurance all add significantly to the cost and availability of healthcare. This has led to a hospital bed shortage. The US, with a population of 310 million people, only has about 950,000 hospital beds.

The million dollar question no one ever asks Bernie is, what qualifies Bernie as a healthcare expert or any other politician for that matter? When we let politicians decide our healthcare needs, they reward their biggest donors rather than the needs of the society. The one true government run healthcare system in the US, the VA, puts its huge union work force’s priorities way ahead of the Veterans’ needs. In 2008, they let 250,000 veterans die on waiting lists for medical care and no one paid any price. And that’s the other problem with government run healthcare. There’s no accountability. Private doctors perform or they go out of business.

The US has a 100% free market healthcare system in cosmetic procedures. Insurance and government plans do not fund any part of this sector. Some of the most popular procedures actual saw a decrease in price. Botox, saw a decrease of 11% over last ten years. Chemical peels saw a 34% decrease. While other procedures saw a modest 30% to 40% increase compared to Hospital costs soaring some 176% over the last ten years. It’s clear, when consumers pay the bills directly they care what they cost. There’s no insurance, there’s no government organization to submit your Botox bill to. The free market place works. Doctors compete on price, quality and provide financing options.