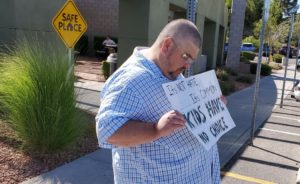 Yesterday, the Henderson Library used your tax dollars to organize and recruited a transvestite to host Drag Queen Story time for children as young as 3 years old. Numerous stories were written, local churches put out emails and there seemed to be a real outcry from the community. But after all that Facebook drama, after thousands of people claimed to be outraged online, only about 6 brave people showed up to protest. And you wonder why the Democrats control every institute in Nevada?

Democrats actually work really hard building their organizations, knocking on doors, working phone banks, showing up to rallies (where they register people to vote) and showing up to protests so the media has to pay attention. The Clark County Democrat Party had 14 campaign offices last year across the valley. The Clark County Republican Central Committee had NONE. No one bothered to even answer the phone at the CCRP office on election day in 2018.

If 100 protesters showed up and made a lot of noise yesterday, the politicians would have been forced taken notice and perhaps changed course. But your failure to get out and protest yesterday just motivated the Democrats to keep going and to push the envelope even more next time.

The truth is, you have the power to change this state. If you want to change this state you have to donate real money, you have to help campaigns by knocking on doors, supporting local Republican groups and organizations, registering people to vote, working the phones and even running for office yourself. Frankly, I see the same various wonderful 200 Republicans at different events across the valley motivated to make the changes we need. But 200 people cannot move the dial on their own. There’s some 480,000 Registered Republicans in Nevada. If just 10% would get off their asses and help we would easily defeat the Democrats.

Ask yourself what have you done for your country today?