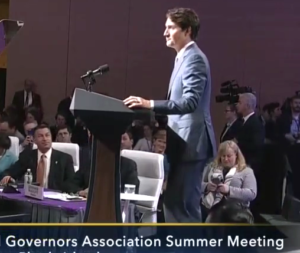 Last week at the annual National Governors Association meeting, Nevada’s own Gov. Sandoval rose to be the Vice Chairman of the organization with Virginia’s Democrat Terry McAuliffe as Chairman. Sandoval also became the Chairman of the NGA’s Finance Committee. But what makes this year’s annual meeting newsworthy is that the ultra-liberal Canadian Prime Minister Justin Trudeau was the keynote speaker.

It’s newsworthy because a foreign leader has never been the keynote speaker of the NGA. But this Obama want-to-be was there on a mission. His mission is to undermine President Trump’s objection to the Paris Climate Change Accord. Behind the scenes, Trudeau pushed the Governors to work to implement the Paris Climate Change accord even though President Trump has withdrawn the U.S. just last month.

Trudeau also lobbied the executive leaders of all 50 states to stay the course on NAFTA. But President Trump seeks to renegotiate the agreement. Arguing against Trump’s economic nationalist policies of America First, Trudeau argued for a thinner trade agreement excluding protectionist policies.

Never Trumper Gov. Brian Sandoval continues to oppose President Trump’s agenda from Obamacare repeal to now the Pairs Climate Change Accord. But is it appropriate for a Foreign Leader to advocate against the U.S. President at the National Governor’s Association meeting to ignore that President’s policies and to move ahead anyway?