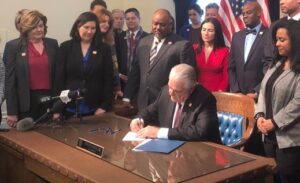 Nevada Gov. Sisolak signed AB431, a new law that grants felons in Nevada the right to vote after being released from prison and permits people who have been convicted of felonies — but not imprisoned — to vote.  Prior to AB431, Nevada law allowed felons to vote two years after “discharge from probation or parole or release from prison,” unless they were convicted of specific felonies involving use of force or violence.

So with the primary fast approaching next week, this will be the first indicator of what affect Sisolak’s new law will have on voter turn out and numbers.