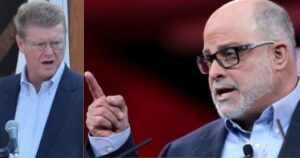 “Democrats are pushing massive American Marxist plans to push social programs and spend trillions – even if they lower it by a trillion dollars – that will enshrine lasting changes to our lives by simply letting the debt grow. Frauds, fools, and phonies are saying that we’re paying for programs that President Trump enacted, which is a lie.”

Mark Levin then read off a list of Republicans who said they will support Pelosi’s $5 Trillion Marxist bill naming our very own Nevada (R) Congressman Mark Amodei.

This is part of trend. Mark Amodei has voted over and over again with the most radical elements of the Dem party including with AOC just a few months ago. Amodei voted for the Critical Race Theory Socialist BS made up holiday “Juneteenth”. Described by Dem News Outlets as supposedly “June 19, 1865, the day enslaved people in Galveston, Texas learned slavery was ended, as a public holiday.”

September 22, 1862 the actual date President Lincoln issued the Emancipation Proclamation seems like a much better date to make a federal holiday. Or June 6th, the date the 13th Amendment passed freeing slaves in America forever.

As Antifa and BLM Democrat front groups continue their rampage through the country ripping down our history, good and bad, Congressional Democrats now want to remove the statures of anyone associated with the civil war including those who fought for the union, like General Grant. Dems hope to erase their own racist history in the process.

A bill, sponsored by Rep. Steny Hoyer (D-MD), tears down a bust of former Supreme Court Justice Roger Brooke Taney sitting in the U.S. Capitol. All 232 House Democrats voted for the legislation, along with these 72 House Republicans. Amodei voted with Nancy Pelosi and BLM. Amodei has voted with Pelosi 57% through out his time in Congress.