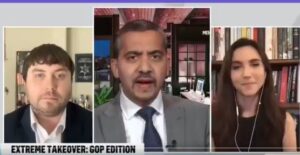 During a sermon delivered in 2009, to the Islamic Unity Society, Hasan quoted a verse of the Quran, Hasan used the term “cattle” to describe non-believers. Hasan advocates for Iran and denies Islam has a violence problem.

Here is a video of radical Muslim journalist who worked for the government owned news outlet, Al Jazeera, Mehdi Hasen explain his anti-Israel position is not racist.

But what’s more concerning is RJ reporter Rory Appleton, accused Republicans in Nevada of anti-semitism in his recent article merely because someone posted an anti-semitic comments on a Republican group’s FB page (Guilt by association only works against Republicans). So Rory attacks all Trump NV GOP supporters as extremists while completely ignoring Black Lives Matter’s calls for the destruction of Israel a couple of weeks ago as Israel fought for it’s very survival under a barrage of 4,000 rockets. Practically every Nevada Democrat embraced BLM and not one disavowed BLM after their anti-Israel hate speech weeks ago. But not one word from Rory Appleton.

The newspaper owned by the recently departed Israel Champion, Sheldon Adelson, seems to have been cooperated by jew hating leftists.

Republicans recruited people like the Proud Boys for ‘Stop the Steal’ rallies.
But now, @RoryDoesPhonics tells @mehdirhasan they’re having to grapple with who these recruits actually are and what they stand for. pic.twitter.com/JKyK9zUDCG