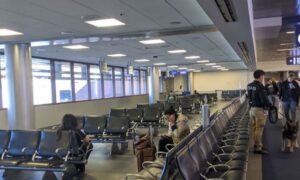 Half of the economy in Las Vegas is shut down, under Gov. Sisolak’s orders, due to the corona-virus, including casinos, bars, restaurants and taverns but McCarren Airport still refuses to screen incoming passengers. Just this week an air traffic controller in the McCarren Tower was identified as infected the Chinese Corona-Virus. Airport police and fire are forced to put on hazmat gear to response to any medical emergency, according to sources.

360 News spoke with Public Information Administrator, Joe Rajchel, McCarran International Airport Clark County Department of Aviation about screening passengers, including those coming in on international flights and there still is no direction from the CDC to conduct screenings. When asked if the Clark County Commissioners could order screening he didn’t know the answer. The Southern Nevada Health District also hasn’t ordered such screenings.

As locals pillage and hoard toilet paper and bottle water, many local folks may be surprised to learn that, as of March 9, 2020, McCarran Airport is STILL NOT conducting Corona-virus screening of any passengers including international passengers. The Corona-virus is hitting Las Vegas extremely hard as conventions are cancelling and putting the NFL Draft next month in question with the potential for huge economic damages throughout Clark County. Flights have been cancelled to South Korea and China but the first case of Corona-virus in Las Vegas was a man who traveled to Vegas from Washington State.

Israel just announced they will quarantine everyone coming into the country for 14 days. The stock market is predicting significant economic losses as it continues to stack up huge losses.

The following statement was issued this afternoon by McCarran International Airport: “The Centers for Disease Control (CDC) is the agency that determines where and when passenger screening is needed. The CDC is currently conducting screening activities at U.S. airports designated as quarantine stations. McCarran International Airport (LAS) is not a quarantine station and the CDC has not deemed screening activities to be necessary at LAS. If and when the CDC decides action is needed at LAS, we will readily accommodate and partner with them to allow the CDC’s public health experts to conduct the activity they believe necessary.”

In 2019, according to the Las Vegas Convention and Visitors Authority, Las Vegas had over 240,000 visitors from China. 47.3 million people traveled through McCarran last year.  At least 25 people have died from the outbreak in Wuhan of the corona-virus worldwide. It’s extremely contagious because it can be contracted both by touch and the virus is airborne.

There are no direct flights from China to Las Vegas according to a cursory search of flights on various websites, but just two days ago, according to local news reports, a patient in Las Vegas was isolated for possibly contracting the coronsvirus.

And a passenger was removed from a South West Flight from Las Vegas to Baltimore for possibly being infected with the coronavirus.

Coronavirus symptoms include fever, coughing, breathing problems and pneumonia. So the Entry Tests consist of checking passenger’s temperature and asking a few questions. Not exactly high tech or very scientific.

McCarran Airport has not issued any warnings on it’s website or any official statements to date.