CHINESE GOV NEEDS TO BE HELD ACCOUNTABLE FOR CHINESE VIRUS

CHINESE GOV NEEDS TO BE HELD ACCOUNTABLE FOR CHINESE VIRUS 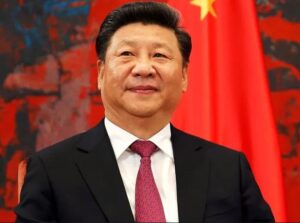 China’s first confirmed Chinese Corona-virus case was on November 17, 2019. China knew about the virus and the rest of the World didn’t find out about the virus until months later. China lies to the World Health Organiztion about the virus in December. China continued to allow their citizens to go on vacation and work around the world. Even as late as January 2020, thousands of Chinese Business people attended the CES Trade Show in Las Vegas. Over 22,000 Chinese came into the U.S. each day until President Trump shut down all flights from China saving possible thousands of lives. Italy wasn’t so lucky. Italy’s catastrophe was traced back to two infected Chinese tourists.

For all you folks who say there’s nothing to worry about, sorry but you are dead wrong. President Trump is taking the threat extremely serious because he’s a numbers guy and when you look at the numbers so far its a pending disaster. The facts are we’ve tested less than 1% of the population so far. Thousand have died in the U.S. in the last month from the Flu. But we do not know if it was from the seasonal flu or the corona-virus, simply because they were not tested. What we do know is that the daily death toll is more than doubling every weak. On March 7, 2020, 105 people died. On March 13, 2020 448 people died worldwide, and yesterday, as of March 18, 2020 973 people died worldwide. 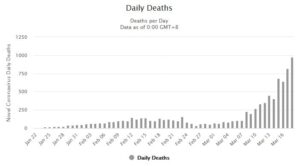 But China continues to spin the crisis instead of taking responsibility for their actions (or in-actions). We haven’t heard an apology or offer to help the U.S. and the world from China or it’s President. Instead, China tried blaming bat soup, then recently tried blaming the U.S. Military. Screw their face saving. Screw cultural sensitivity. The Chinese Government’s reckless disregard for the lives of millions of people around the world has already killed thousands and put 20% of the U.S. out of work. Those families, deserve compensation. The U.S. deserves compensation from China for $5  Trillion in damages so far.