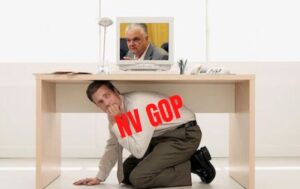 Endless Sisolak emergency directives, weekly news conferences and not one news conference from the Republican Assembly and Senate leadership this entire pandemic. Now, an Unconstitutional, 2nd Special Session and not a single word from Republican lawmakers.

Thousands of our fellow Nevadans still can’t get through on the phones to get help from the Unemployment office. Two months and still no Director appointed. Repub Lawmakers wrote a letter on July 29, 2020, 4 months into the crisis, “We urge an investigation into DETR”. They never mention in their open letter who should investigate DETR, because it’s the Repubs who should be investigating DETR.

Not one word from them about the Riots and looting in Vegas and Reno.

No news conference to condemn Sisolak for shutting down the bars a few weeks ago for no legitimate reason.

Not one word from the Repub Assembly Caucus Leader Family Doctor Robin Titus about Sisolak banning the medication hydroxychloroquine unlawfully. She could have crush him publicly on this.

Not one word about the stupid mask rules and fines on businesses.

We shouldn’t be surprised, after all, these are the same losers who refused to help sue to stop the Red Flag Gun law and the Gun Background Check law last year. They voted for the diesel fuel tax increase over the objections of the voters.

They supported Nevada Secretary of State Cegavske when she authorized the mail-in ballot election back in March. And now they stand quietly by as the Dems pass a law legalizing the theft of the coming election, making mail-in-ballots and ballot harvesting a certainty. Trump cannot win in Nevada when the election is rigged like this. But these Never Trumpers are just fine with that. Not one word of support for Trump from this bunch on their FaceBook pages.

The Dems passed a law stripping cops of their rights. Republican Lawmaker Tom Roberts, in a solid red seat and a former Metro Police Assistant Sheriff, not only refuses to speak out but collaborated with the Dems in writing the law.

I spoke with several lawmakers back in April who all said they didn’t want to speak out because it might hurt the election chances of April Becker, Carrie Buck and others they feel have a real chance of winning. The problem with that is, the Repub Party haven’t lifted a finger to help April Becker, Carrie Buck or other great candidates running this year. No money and no support. None.