IS IT TIME FOR A SPECIAL PROSECUTOR, OBAMA — USED ALIAS IN EMAILS WITH CLINTON, ACCORDING TO NEWLY RELEASE FBI DOCS

IS IT TIME FOR A SPECIAL PROSECUTOR, OBAMA — USED ALIAS IN EMAILS WITH CLINTON ACCORDING TO NEWLY RELEASE FBI DOCS 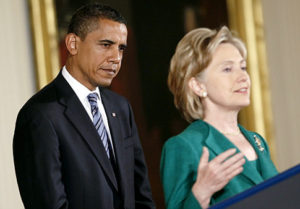 As NEWSMAXTV LAS VEGAS Political Contributor Rob Lauer said a couple months ago, “Clinton will never be prosecuted because Obama certainly received emails from his Secretary of State and hence was fully aware she was breaking the law.”

The FBI dumped documents yesterday hoping to bury them over the weekend. The newly released documents contain emails between Obama and Clinton in which Obama used an alias according to FBI reports.

The President may have broken the law by conspiring to conceal facts from Congress and investigators. And the fact that he continued to engage Clinton as his Secretary of State in numerous emails using an alias is further proof he knew it was illegal and he too disseminated, through her unsecured system emails, classified materials.

Congressman Joe Heck, who sits on the House select Committee on intelligence, had no comment.