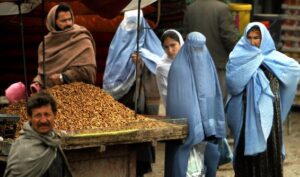 As Darth Vader said “Your failure is complete”. Instead of hunting down and killing the Taliban, Liberal Woke U.S. Generals spent over $1 billion pushing “gender equity” and transgender studies since 2002 in Afghanistan. As the U.S. fled Afghanistan last week after 2o years of war, it’s obvious to anyone not consumed by woke politics that our nation failed to win the war because we wasted time and money on social programs instead of killing terrorists.

How did some 40K Taliban survive 20 years of war with the U.S.? Because the U.S. handcuffed our troops ability to kill Taliban, instead focused on hearts and minds through liberal arts classes. If a soldier dared kill a Taliban before they shot first that soldier was dragged back to the states and tried for murder. https://360newslasvegas.com/as-trump-ends-obama-era-prosecutions-of-u-s-combatants-he-needs-to-pardon-lt-lorance/

In February of this year, the Special Inspector General for Afghanistan Reconstruction released its report detailing how the U.S. spent some $787.4 million promoting gender equality in the beleaguered country by “promoting social justice for women and girls.”

“Among the improvements listed in the report include a decline in the maternal mortality ratio, or the number of women who die due to birth- or pregnancy-related complications. The percentage of pregnant women receiving prenatal care by skilled professionals rose from 16% to 61% between 2002 and 2015. More women are also working in healthcare, with the number of health facilities with at least one woman healthcare worker growing from 25% to 95%, according to the report.”

“There was an improvement in the number of girls enrolled in school and the number of women in teaching jobs, and the literacy rate among girls grew from 20% in 2005 to 39% in 2017.”

At the same time, U.S. Woke Generals allowed Afghan men to marry 13 year old girls and molested boys as part of their culture.

But in the end, all the do-gooders failed to kill the perpetrators of oppression, the Taliban, who today rule the country again without fear of U.S. Woke Generals forcing them to learn about “White rage.”