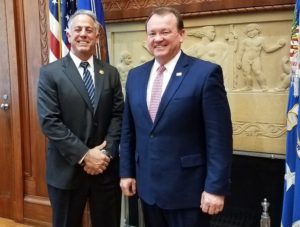 In January, President Trump signed an executive order requiring ICE to publish a weekly shaming report highlighting the worst of the worst counties in the U.S. who are refusing to turn over criminal illegal aliens to ICE that are in their jails. In the first report issued last week, Clark County was number one on the list of the worst offenders. This week has LA County Sheriff McDonnell as the 1 number offender and Clark County as number 4 but with an increase of more than 5% over last week. Then AG Sessions held a press conference last week announcing his agency was moving to cut off funds to counties on the list which could cost Clark County over $9 million dollars.

Sheriff Lombardo is in Washington D.C. disputing the way ICE is calculating ICE detainer holds because he’s getting killed in the press. And with him facing the voters next year he is desperately trying to turn around his image. And after it was discovered the Lombardo donated over $3,500 to liberal pro sanctuary city groups like the ACLU many voters are now suspicious of Sheriff Lombardo’s motives.