CONGRESSWOMAN DINA TITUS CONSIDERS RUN FOR US SENATE AGAINST HELLER

CONGRESSWOMAN DINA TITUS CONSIDERS RUN FOR US SENATE AGAINST HELLER 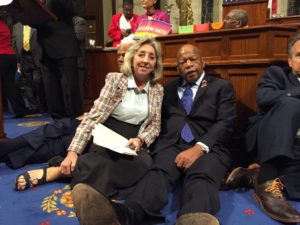 Congresswoman Dina Titus is back at it again. After failing in her bid to run for Governor and other offices she is back and ready to run for the U.S. Senate from Nevada against Senator Dean Heller.

The Georgia born Titus was in the Nevada State Senate for 20 years before running statewide for Governor against Jim Godson and losing in 2008. She then ran for Congressional District 3. After just one term and voting for Obamacare, Joe Heck defeated her in 2010. Titus then got a teaching gig at UNLV paying over $200,000 a year to teach just one class a week. After the 2010 census and redistricting carved out a guaranteed Democratic district, CD1, Dina Titus was awarded for taking a hit in 2010 and became a Congresswoman again.

Now Titus is eyeing a run at statewide office. On one hand she has proven to have very little voter appeal outside Clark County in the rest of the state. But Clark County has so much juice that she can win the Senate Seat by winning Clark County.

Dina Titus has one of the most liberal voting records in Congress voting for TPP, sanctuary cities, amnesty for illegal aliens, Obamacare, abortion on demand, and every liberal goofball bill ever proposed. Titus can certainly raise the money she needs and she is a super hard worker. But that voice of hers is enough to make a grown man cry. I’m not sure voters want to hear that voice coming over the news for the next year, let alone 6 years in the Senate.