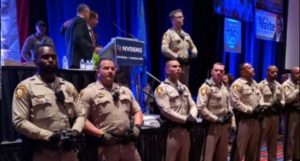 Over the weekend at the Nevada State Party Convention Bernie Sanders supporters accused the Clinton team and Democratic Party leadership of cheating. Metro Police came into the Paris Hotel meeting room and shut down the convention threatening to arrest anyone who didn’t disperse according to eyewitnesses and social media videos posted online. But if you look at the news reports and websites of Channel 8 News, Channel 13 News, Channel 5 News, none of these local news organizations ever mention Metro Police were called out. Instead, all three news organizations put out the uniform statement “The director of security for the Paris informed the state party and representatives of both campaigns around 10 p.m. that the property could no longer provide “the necessary security under conditions made unruly and unpredictable.” Paris hotel security requested a prompt conclusion to the event.”

The media here in Nevada and around the country has been quick to point out any disturbances at Trump rallies here and across the nation. For weeks, that was all that the major media networks reported about Trump rallies practically.

Why the double standard for Democrats and Clinton events?