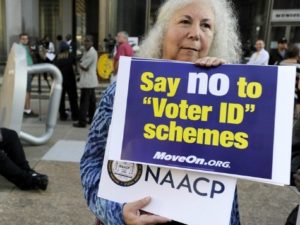 The Nevada Democratic Party refused to seat 64 Sanders delegates who lacked proper ID, but six delegates were allowed to be seated after they provided proper ID showing their address and birthdate. This is the same party whose leaders have called those who support voter ID at polling places “racists”.

According to Sanders supporters who took to the street to protest the results on Sunday, the Clinton people stole the election by refusing to seat the 58 delegates giving Clinton a victory. In the final count, Clinton had 1,695 delegates seated at the convention and Sanders had 1,662 delegates seated. The Nevada State Democratic Party selected 20 delegates for Clinton and 15 delegates for Sanders to go to the National Convention in July this summer in Philadelphia.

Democrats have opposed voter ID requirements at polling places for years, claiming they pose an unfair burden on poor voters and that there is no record of voter fraud to support the policy change.