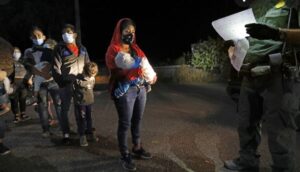 Attorney General Ken Paxton sued the Biden Administration for refusing to test and quarantine Illegal Aliens with CV19 and instead housing them in concentrated high capacity faculties in Texas, threatening the Texas pubic health and Cv19 recovery. The Biden Administration is then transporting CV19 infected illegal aliens into the interior of the U.S. where they are eventually released.

According to the TX AG:

The Biden Administration has threatened the health of Texans without justification or explanation of their actions. While abandoning their own standards, they have failed to enforce the Immigration & Nationality Act’s backstop, a longstanding federal law requiring the detention of aliens arriving in the United States who might transmit diseases of public health significance.

“President Biden’s outright disregard of the public health crisis in Texas by welcoming and encouraging mass gatherings of illegal aliens is hypocritical and dangerous. This reckless policy change stifles the reopening of the Texas economy at a time when businesses need it the most and when our children need to get back to in-person learning as soon as possible,” Attorney General Paxton said. “Law and order must be immediately upheld and enforced to ensure the safety of our communities and the reopening of the strongest economy of the country.”