NEVADA RANKS DEAD LAST WITH HIGHEST UNEMPLOYMENT IN THE NATION

NEVADA RANKS DEAD LAST WITH HIGHEST UNEMPLOYMENT IN THE NATION 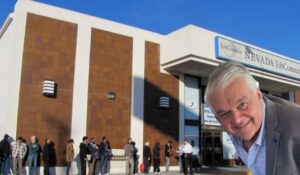 September’s jobs report put Nevada dead last in the nation with unemployment at 7.7%, according to the U.S. Labor Department report.  Yet not a peep out of the local Nevada News about Sisolak’s failed record. In fact, Nevada came in 51st behind every single state including Washington D.C.

Nevada was barely beat out by California and New York. States with Democrat Governors rounded out the bottom ten states with the highest unemployment numbers last month.

A month ago, at a public meeting opening a robot factory in Nevada, Sisolak publicly stated that “The Casino Industry lost thousands of jobs that will never return”.

With thousands of jobs in Las Vegas going unfilled, the extremely high unemployment benefits Democrats are paying folks not to work is clearly having a huge impact on our state with thousand of folks not willing to work.