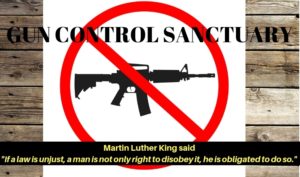 Liberals now must go to court and argue that the same kind of sanctuary laws they passed, refusing to spend local tax dollars to turn over illegal aliens to ICE, are unconstitutional. But there’s a huge difference between the Illegal Alien Sanctuary laws and the 2nd Amendment Sanctuaries. First, the cities and states refusing to turn over illegal aliens to ICE are ignoring federal laws, specifically federal ICE warrants. No one doubts the power of the Federal government to enforce immigration laws and to deport illegal aliens, especially those arrest for crimes and in custody. Sheriffs and Counties are refusing to spend their local tax dollars enforcing an unenforceable law. Liberals are sheltering people who violated our national borders and national sovereignty. Liberal gungrab laws are targeting law abiding American citizens.

SB 143 requires private citizens go to a private gun store, turn in their guns, and then allow the store to charge a fee to conduct a background check before transferring the gun to the new owner. BTW the Brady Bill forbids any records of that transaction to be retained by the government. So how does one enforce that? And it’s only a misdemeanor for the first offense. County Sheriffs have determined its not worth their time and resources to pursue. As elected officials they get to set their department’s priorities.

BTW Clark County Sheriff Joe Lombardo stated during his campaign for re-election that his department will no longer enforce marijuana laws including not arresting low level street corner dealers. He stated that since the drug is essentially legal in Nevada he is choosing to spend his resources fighting other more pressing crimes. Oh and good luck trying get a Metro Officer to come out and investigate your home burglary or car break-ins.

Just in Nevada, there are tens of thousands of laws on the books. Certainly elected Sheriffs must prioritize which laws they will actively enforce by spending tax dollars to pay detectives to make cases. So far, five Nevada County Sheriffs have stated publicly that SB143 is unenforceable and will do nothing to make their streets safer. So they are choosing not to spend money enforcing that law.

In addition, Sheriff Watts of Eureka state din an open letter to Governor Sisolak that the new gun control laws are unconstitutional and they swore an oath to defend the U.S. Constitution and the State Constitution first and foremost. As they see it, one party controlled State legislatures are criminalizing law abiding citizens and trying to force local sheriffs to arrest them.

When you arrest someone, you deny them their freedom and often destroy their lives. People often lose their jobs, homes and their families. It’s no different than when Northern sheriffs refused to detain and turn over runaway slaves during the civil war. We all have a moral duty to refuse to enforce immoral laws. Stripping a citizen’s freedom and locking them away for simply selling their firearm to their neighbor or brother in law is immoral.

As Martin Luther King said “If a law is unjust, a man is not only right to disobey it, he is obligated to do so.”