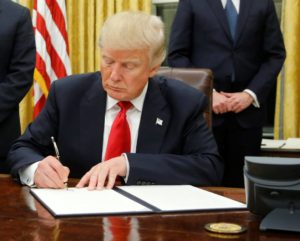 Today President Trump kept another campaign promise by ending DACA. DACA or Deferred Action for Childhood Arrivals is a program that was created by President Obama through an executive order in 2012.  According to lawsuits winding its way through the federal court system, Obama’s executive violated U.S. federal immigration law and was an overreach of executive authority.

Now President Trump has given the order to wind down the program over the next six months and demanded Congress act quickly to address the issues plaguing hundreds of thousands of people. DACA gave refuge to kids who were brought across the border illegally by their parents before they were 18 years old, many when they were infants and toddlers. And many of these kids never even knew they were illegal aliens themselves until years later.

In February 2015, the Obama administration told Congress that its DACA program “will also allow illegal immigrants to apply for advance parole, which could ease their pathway to eventual citizenship, according to the chairman of the House Judiciary Committee.”

DACA applies to illegal aliens who came into the U.S. before they were 16 years old and younger than 30 as of June 2012. As of August 2016, more than 220,000 illegal aliens in Texas had applied for a permit or a renewal under the program, and nearly 200,000 of those have been approved, according to ICE. And California had an estimated 387,000 applications and 359,000 approvals during the same time frame. The program affects up to a million people.