LAXALT THE GAFF MACHINE, HERE’S WHY THEY DON’T LET HIM TAKE QUESTIONS

LAXALT THE GAFF MACHINE, HERE’S WHY THEY DON’T LET HIM TAKE QUESTIONS 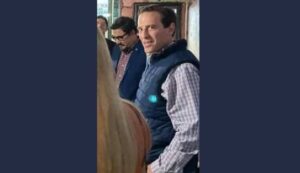 Most Nevadans are leery of Adam Laxalt’s ability to perform in the upcoming campaign for Nevada’s U.S. Senate Race against seasoned Democrat U.S. Senator Catherine Cortez Masto after his horrific campaign against Steve Sisolak for Governor. During his run for Governor, Laxalt refused to answer questions from the audience on many occasions when I saw him speaking at events.

And now once again Laxalt has proven why his handlers don’t trust him to do real interviews and take real questions. In a sit down interview this week, Laxalt was asked

Non Partisans have been the largest growing segment of voter registration.  How do you convince them to vote for a Republican on election day? What is your messaging?

“Everyone has a political view. We don’t need to do anything–other than show what the Left is doing to America. I don’t care if you’re an independent, or you’re a suburban Mom, or you’re a swing voter, or you’re a moderate Democrat”

Laxalt was asked what went wrong with his run for governor?

“Do I think anyone could have won that race? No. It was a blue year.”

Laxalt refused to take responsibly for his failed election where his big campaign ad going into the 2018 general election called for increasing spending on education by $500 million. Or the fact that he choose the biggest RINO in Nevada’s history as his Lt. Governor, Michael Roberson who lost to non of the above. Or the fact that Laxalt refused to sit down with his opponent, independent candidate for Governor, Ryan Bundy, and apologize to him for leaving him to rot in Federal jail for 2 years while Laxalt served as Nevada Attorney General. Bundy was possibly willing to step out of the race which could have given Laxalt an extra 5 points.

I’m glad someone else did the interview, because he would have accused me of tricking him with tough questions. The fact is he screwed up the most basic questions anyone could have asked him.

Answering what is your message and he answers “We doesn’t need to do anything” might be the worst political answer in the history of the world. And so far Laxalt’s campaign is doing nothing to gain the support of Republican base voters.

At the end of the day, Laxalt was just another RINO candidate for Governor, and now he’s just another RINO candidate for the U.S. Senate standing with Mitch McConnell, refusing to support impeaching Pres. Biden. Even after 13 Marines were murdered by a suicide bomber. And that’s why he now loosing to a new comer, Sam Brown, 46% to 28% in the latest poll.  Laxalt’s opponent Sam Brown came out and said he supports impeaching Biden.

The fact is, if Adam Laxalt was Adam Smith no one would take his seriously anymore. He’s traded on his last name all his life because he lacks the basic skills to lead. He should be serving coffee, not serving in the U.S. Senate.