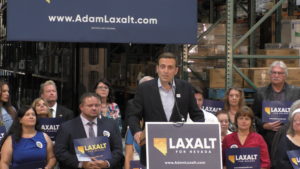 Shortly after the ballot initiative passed by just 10,000 votes in 2016, Attorney General Laxalt issued an official opinion declaring the law unenforceable. Laxalt went on to describe how badly the law was written which required the FBI to perform background checks for the transfer of guns between “private” parties. The problem is, Nevada already chose to be a point of sale state which means Nevada performs it’s own background checks through the Department of Safety. So the FBI refused to perform the background checks making the law unenforceable.

There’s no word yet on whether the gun control group who filed the law suit is planning to appeal.

The Democrats, led by Steve Sisolak, have attacked Attorney General Laxalt for refusing to enforce Question 1.