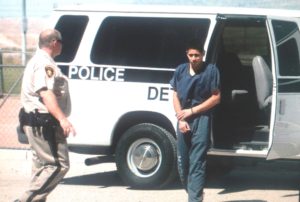 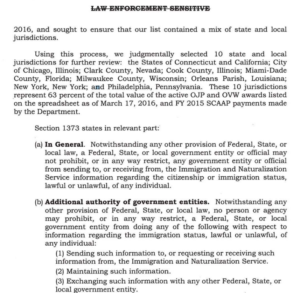 A newly released Department of Justice office of Inspector General report highlights 10 jurisdictions in the US violating federal law by failing to enforce immigration law. Clark County was one of the 10 jurisdictions that have refused to turn over illegal aliens to ICE after being arrested by Metro Police, and instead released back into the community. According to the report, Clark County was listed on an ICE Declined Detainer Report in 2014 and 2015. Clark County was a beneficiary of DOJ grant funds under the Violence against Women grant program and as such may be in violation of Federal Code 8 U.S.C. 1373.

The dollar figure represents 63 percent of the active OJP awards as of March 17,2016, and FY 20 15 SCAAP payments made by the Department.” According to the report Clark County has received federal grants under the DOJ program of $6,257,951.

The report was in response to a request by Congressman John Culberson who is the Chairman of the Appropriations subcommittee on Commerce, Justice and Science. The Inspector General’s report concluded that the jurisdictions were in fact violating federal law.

Congressman John Culberson issued the a statement saying “The Obama Administration has a plain duty to cut off law enforcement funds to any jurisdiction that violates this responsibility to ensure the deportation of criminal aliens.”

(a) In General. Notwithstanding any other provision of Federal, State, or local law, a Federal, State, or local government entity or official may not prohibit, or in any way restrict, any government entity or official from sending to, or receiving from, the Immigration and Naturalization Service information regarding the citizenship or immigration status, lawful or unlawful, of any individual.

(b) Additional authority of government entities. Notwithstanding any other provision of Federal, State, or local law, no person or agency may prohibit, or in any way restrict, a Federal, State, or local government entity from doing any of the following with respect to information regarding the immigration status, lawful or unlawful, of any individual:

(3) Exchanging such information with any other Federal, State, or local government entity.

According to the report, ICE Detainer Requests have been met with the following response from Clark County Metro Police refusing to obey federal immigration law:

“Recent court decisions have raised Constitutional concerns regarding detention by local law enforcement agencies based solely on an immigration detainer request from the Immigration and Customs Enforcement (ICE). Until this areas of the law is further clarified by the courts, effective immediately the Las Vegas Metropolitan Police Department will no longer honor immigration detainer requests unless one of the following conditions are met: 1. Judicial determination of Probable Cause for that detainer; or 2. Warrant from a judicial officer. … The Las Vegas Metropolitan Police Department continues to work with our federal law enforcement partners and will continue to provide professional services to the Las Vegas community regardless of their immigration status in United States. Via Press Release on: July 14, 2014.”

Clark County’s sanctuary city policy was highlighted at the DNC convention last week when an illigal immigrant with a deportation order (according to reports) from Las Vegas, spoke on stage to a national audience.