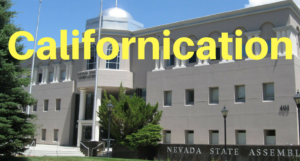 According to the Nevada Secretary of State Campaign 2016 disclosure reports, 1,155 donations totaling $9,959,396.83 were made from California to Nevada Politicians in 2016. The clear winner of all that money were Democrats and more moderate (Liberal) Republicans. Less than 5% went to “Conservative” Nevada Politicians.

The majority of the money came from Unions, California Corporations, and law firms. Over 85% of the money that flowed from California went to Democrats including thousands into the Nevada State Democratic Party. Paul Anderson was the big winner among Republicans receiving over $100,000 from outside groups.

Some of the biggest Corporate Cali donors were AT&T, Anheuser Busch, Solar City, and Sempra Energy.

Many conservative political observers have been complaining for years about the “Californication” of Nevada. Many people also observed how radical these Democrats were in the last session verses in the past. The legislation Democrats wrote and put forward was the most extreme left-wing every, said Republican Assemblyman and newly elected Minority Leader Jim Wheeler at a recent event in Las Vegas.

This report certainly explains the significant link between the California type policies we saw flowing in the Nevada State legislature this last session and all the cash flowing from California liberal Corporate and Union donors.