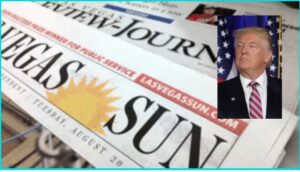 Lib Fake news outlet, The Las Vegas Sun, has such a low circulation that they’re stuffed in the Las Vegas Review Journal print newspaper. Full of left wing Trump haters, The Las Vegas Sun was on the verge of Bankruptcy through the pandemic allegedly begging the Trump Small Business Administration for a hand out.

Most news outlets had the best rates in a decade during the pandemic while most folks where stuck at home for months. But when you report the same liberal fake news as everyone else in town its difficult to stand out.

According to a website that published the names of companies who received PPP Loans, The Trump SBA gave The Las Vegas Sun a life line in the form of a PPP Loan between $1 and $5 million. But if they spend at least 75% of the money in the first three months on salaries then the loan is forgiven.

PPP loans where supposed to go to small businesses, and while perhaps The Sun is now a smaller business, they are still a multi million dollar legacy news outlet owned by a conglomerate.

But they weren’t the only liberals in Nevada, who took money from the Trump SBA. Sisolak supporters R&R partners also took between $5 and $10 million in PPP loans, according PPP loan reports.