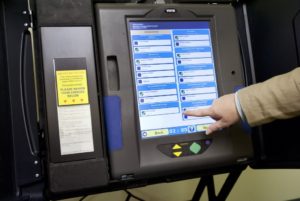 District Court Judge Michelle Leavitt dismissed requests, filed by three June Republican Primary candidates, to review the original paper ballots cast in their assembly districts, this despite expert testimony that there were numerous errors and unexplained anomalies in the vote count. Republican candidates Diana Orrock (AD9), Blaine Jones (AD21), and Mary Rooney (AD41) presented their case in a day-long hearing. The paper ballots are those printed out for the voter to inspect before casting his or her vote.
Six Republican candidates from the June 2016 primary election had filed “Statements of Contest” in Clark County District Court based on NRS 293.410(f),  which allows for an election contest on grounds that that there was a “possible” malfunction in the voting or counting devices used to record and tabulate the votes.
Attorney for the candidates, Joel F. Hansen, argued, based on the sworn expert testimony presented at the hearing, that it was not only possible but very probable that there were malfunctions, either unintentional or deliberate, somewhere in the vote counting, and that the Judge should allow these candidates access to the election materials, including paper ballots, which are being kept secret by the Registrar of voters. Hansen argued that the contestants only wanted to find out the truth by actually inspecting the paper ballots, rather than just believing the word of the Registrar, who had refused their computer security expert Robert Frank access to the ballots, despite the Registrar’s claims that such access was freely granted.
The initial discrepancies were discovered by independent research into County Statements of Vote by Nevada’s Citizens Task Force for Voter Rights (CTFVR).  Detailed analysis revealed that the Clark County “Statement of Vote” and the associated abstracts were misleading because it was found that the vote abstract numbers for those Republican Assembly Races did not correspond to those races.  Instead of reflecting just the Republican votes, the abstract reflected all votes cast, Democrat and Republican. Reporting the numbers this way concealed how many votes were counted which were cast by phantom voters.  These “over-votes” are impossible if the voting machines are functioning properly. Also, the official results showed huge percentage swings between the votes cast during early voting and the votes cast on Election Day.  Statistics show that these swings should not and cannot happen without some type of malfunction in the system, either unintended or deliberate.
“It was clear that the Clark County Election Department, the District Attorney, and the Judge did not want the voters to have the opportunity to compare the actual paper ballots with the computer tallied results, which computers have been proven before to be fraught with erroneous and incorrect voter tally information,” said USAF Retired Colonel Bob Frank, Chair and Co-founder of CTFVR. “With so many national reports of similar election machine failures and increasing hacking into government computers, candidates are obligated to all Nevada voters to protect the integrity of our election system. Trustworthy elections are one of the foundations of our Republic. It is our duty to help ensure there is end-to-end elections integrity.”
Attorney Joel F. Hansen stated, “We feel our case holds great merit. The State statute grants authority to a judge to allow for a review by these candidates of the actual paper ballots cast so that the results can be compared with the election results presented to the public. This statute allows a judge to grant access to the records of the election system so that the accuracy of the reported vote count can be verified.  We are only trying to help to protect the integrity of the election system, thus increase the confidence of the public, but we are being blocked by the Registrar from doing so. If the Registrar has nothing to hide, why is he preventing inspection? We are considering an appeal.”