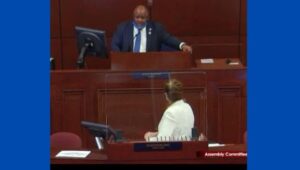 As the Nevada Legislature continues its Unconstitutional special session this week trying to jam thru new taxes, allowing remote voting and banning reporters and the public from the State Capital Building, Sisolak is already planning a 2nd Special Session, possibly as soon as this coming week.

The 2nd Special Session will focus on “Social justice” including defunding law enforcement in Nevada and making it “legal” to ballot harvest and implement mail-in-ballot rules.

Even though the Dems and NV Secretary Of State Barbara Cegavske promised the public that mail-in-ballot rules would only be required for the primary, the 2ns special session will now provide Statutes for county officials to decide for themselves without permission from the NV Secretary of State in the future.

Assemblyman Jim Wheeler said a 2nd Special Session is already in the works by the Democrats and Governor Sisolak to defund cops. Police groups are already playing defense trying to stop the Dems. But these policies are part of a larger National Democrat effort.