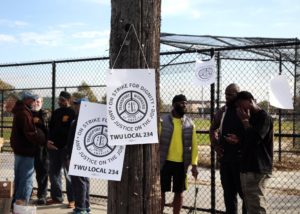 Today in Philly, Transportation Workers Local Union 234 are on strike and a judge just ruled they can continue to strike for the time being. In the latest polls Pennsylvania, with its 20 electoral votes, is a statistical dead heat in the election, even tho its voted Democrat every Presidential Election since 1992.

But unlike Nevada, they only vote on eleciton day, there’s no early voting there, so with the biggest city in the state’s entire transportation system shutdown the Democrats’ election turnout is in serious doubt.

The Southeastern Pennsylvania Transportation Authority said in a statement that if the strike looks like it will continue through Nov. 8, the agency will pursue legal action to force the union to lift it for Election Day.

“If we foresee an agreement will not come to pass, SEPTA intends to seek to enjoin the strike for November 8th to ensure that the strike does not prevent any voters from getting to the polls and exercising their right to vote,” the agency said in a written statement last Tuesday.

But the judge in the case has delayed any effort to resolve the strike until at least tomorrow’s hearing. The Transit Workers Union is using the election as a bargaining chip holding the Democratic City leaders hostage.

The city of brotherly love has ground to a halt and if the strike is not resolved, thousands of urban voters will certainly not make it to the polls assuring Donald Trump wins Pennsylvania. Union power has certainly been a double edge sword for Democrats this eleciton year.