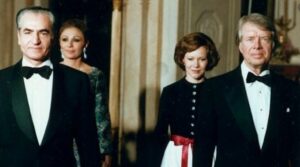 In 1979, then, American President Jimmy Carter refused to prop up the Shah of Iran and instead allowed the Ayatollah Ruhollah Khomeini to return to Iran. Khomeini had been in exile for over 10 years at that point. The Shah was a U.S. ally. Remember the Cold War with the U.S.S.R. was raging across the world and Iran was a buffer between the U.S.S.R. and the greater middleeast. We armed and equipped the Iranian government with the most modern weapons of the day, including a fleet of F-14 tomcats.

But Liberal Democrat Jimmy Carter thought it was unfair not to allow Khomeini to return to the Iran. In the 1970’s Democrats were pursuing a strategy of containment of the Soviet Union and not its destruction. Sound familiar? Containment of evil governments never seems to work out. So Carter forced the Shah to allow Khomeini to return to Iran setting off the Islamic Revolution and the end of the Shah’s rein. The Shah fled to Egypt. Khomeini and his Neo Fascist government have murdered their way through the last four decades to stay in power. They have armed terrorist groups across the middleeast and have engaged the U.S. in a proxy war for at least the last 40 years. Iran armed and equipped terrorists in Iraq with arm piercing weapons that killed some 600 U.S. Troops. They continue to pursue a nuclear bomb. They invaded Syria and Yemen. They control the Iraqi Parliament now through the Iraqi Shiite majority. They have provided their proxy, Hezbollah, with tens of thousands of rockets that continue to be shot at Israel.

A short time after the Shah left Iran he became gravely ill according to reports. Carter allowed the Shah to visit New York doctors seeking medical help in 1979. Khomeini used this as a justification to attack the U.S. Embassy in Iran which Carter failed to boater security at following the downfall of the Shah. Then Carter failed to send troops to defend the U.S. Embassy as Iranians stormed it and took some 52 Americans hostages. And Carter still did nothing. Carter evidentially, many months later, authorized a doomed raid to save the hostages. In 1981, only when President Reagan was sworn in, did Khomeini release the Hostages fearing the new sheriff in town.

Iran tried a replay of the hostage game last week when they attempted to storm the U.S. Embassy in Iraq. But this time President Trump acted forcefully and sent troops to boaster security at the Embassy. He then authorized the killing of Iran’s top general who led the attack on the Embassy. This followed a year of proactive actions and violence Iran aimed at U.S. and our allies.

The missile attack on a U.S. base by a nation state is an act of War and demands major action. Its time to end the Iranian Khomeini’s rein. There needs to be an extremely high price for attacking U.S. troops. I would like to see Pres. Trump demand first that all Iranian troops retreat to Iran from Syria and across the middle east and that the Supreme Leader of Iran step down. Only then we will not attack and destroy their country.

If not, we should target their troops outside their borders, attack Iranian military targets inside Iran, impose a full embargo of all shipping in and out of Iran and seize all assets worldwide. We should also arm the resistance inside Iran. Victory is clear, the end of the Khomeini rule and pro-western reformers installed.

Trump did not start this war. The Iranian leadership started this war the day they raided our U.S. Embassy in Iran and took 52 Americans Hostages. This is Jimmy Carter’s 40 year War. Trump just needs to end it now.