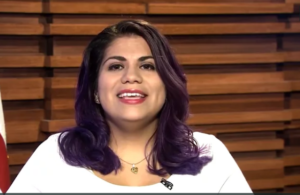 While watching TV the other night, I came across our local Vegas PBS channel which was running a promotional commercial for their local station. The promo ad starred local Democratic DNC star and illegal alien, Astrid Silva, who gave the Democrat’s response to President Trump’s Speech before Congress a few months ago. Silva also spoke out in support of the name change for Harry Reid before a Nevada State Senate committee.

Silva was telling the audience in the TV spot the value Vegas PBS brought into her life and how it helped shape her future. Silvia has been in the U.S. for at least the past 20 years as an illegal alien. But she isn’t just any illegal alien. She is a close friend of Harry Reid and introduced President Obama in Las Vegas a few years back at a rally for so called Dreamers. So why with all that fire power doesn’t she have her citizenship yet after 20 years?

Silva bragged on twitter during the election that she was actively registering people to vote. But it’s against the law for a noncitizen to engage in voter registration.

360Daily.net sent Vegas PBS a request seeking how much if any money they paid Silvia to appear on the show. So far we have not received any response.